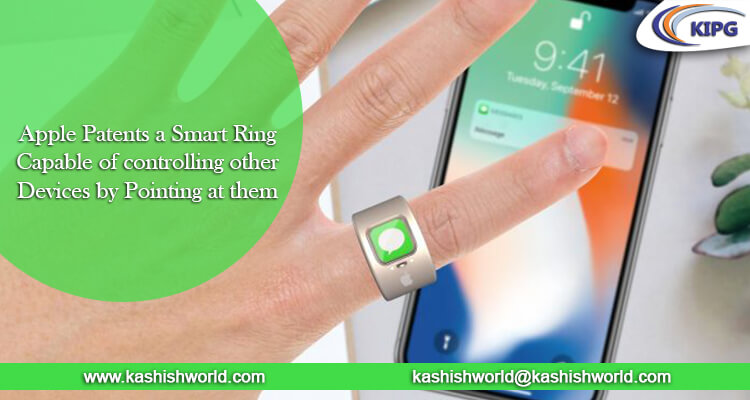 The Cupertino-based tech giant, Apple Inc., has been efficiently developing technology for some time now that could end up in a smart ring. The company has indeed filed several Patent Applications corresponding to the same over the years, which cover a lot of things, among many others, like the control of external devices and health functions. Back in 2016, Apple had received its first patent for a smart ring. However, last year in October, the company again filed a patent application for its smart ‘Apple Ring’ that aimed at improving its capability further.

Apple’s new patent, which recently got published by the US Patent and Trademark Office (USPTO), suggests that the smart ring might make use of gesture control for sending commands to the compatible devices; for instance, the Apple TV, when pointed specifically in their direction. Let us consider the same with the help of an example – suppose you own multiple HomePod speakers, and you wish to lower the volume on one of them, then you can conveniently tap on the ring, perform some gesture, or interact with the ring’s inbuilt small touchscreen. In the previous patent application corresponding to the same, Apple had implied that the ring would come with Siri connectivity, a biometric sensor, and a small touchscreen with a specification of gesture controls.

The new patent has described the invention as “Devices, methods, and graphical user interfaces for a wearable electronic ring computing device.” Furthermore, the patent has also outlined the advantages of the smart ring over the already existing Apple devices, including the iPhone and MacBook Pro.

The abstract in the patent has mentioned a few crucial aspects concerning the functioning of the smart ring, which are – A user can effectively control an external device, with the help of the wireless ring device. The user can wear the ring on one or more fingers of his or her hand. The ring detects an input, and after following a determination that a predefined hand gesture directed towards an external device was performed – it, in response, transmits instructions to change an output of the external electronic device based on the input.

In this scenario, it is imperative to note that receiving a patent for a novel technology does not confirm the launch of a new product in the market. Companies and organizations keep filing patent applications to protect their Intellectual Property (IP). However, when it comes to a smart ring, the same is not common among the tech giants as of now – only Amazon had launched one last year in September.