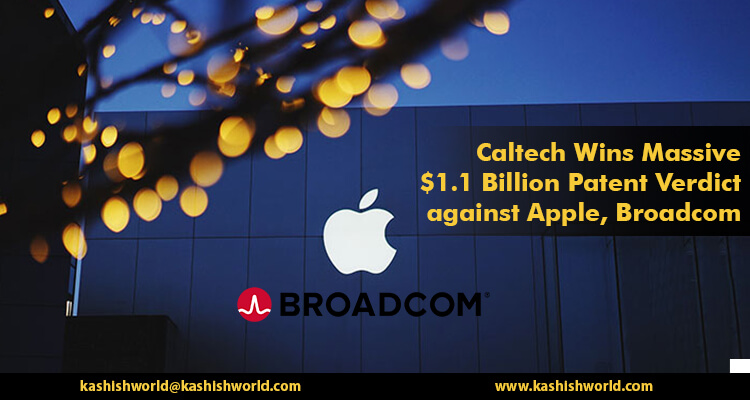 The California Institute of Technology (Caltech – private doctorate-granting research university in Pasadena, California)has recently won a massive $1.1 billion jury verdict against Apple and Broadcom in a Patent Case. According to lawyers for Caltech, the patent verdict has awarded Caltech with $837.8 million from Apple and $270.2 million from Broadcom.

In its lawsuit filed, the university had alleged that Broadcom’s WiFi chips used in somewhere around hundreds of millions of iPhones infringed patents corresponding to its data transmission technology. Both Apple and Broadcom have stated that they have plans to appeal the patent verdict. Broadcom also mentioned that it disagreed with the legal and factual basis for the patent verdict. In the court filings, Apple said that all of the university’s claims against it came as a result of using Broadcom’s WiFi chips in its devices. The tech giant considered itself as merely an indirect downstream party. Lawyers for both Apple and Broadcom have denied the claims of Patent Infringement and stated that the university wasn’t entitled to such significant damages even if they were using the inventions.

Caltech had filed the Patent Lawsuit in 2016 by naming iPhones, Apple Watches, iPods, HomePod smart speakers, Mac computers, and AirPort wireless routers (discontinued now) as the products and devices that used the infringing Broadcom components. As both Apple had already previously stated in court filings that the accusations were a result of the incorporation of allegedly infringing chips, the only issue before the jury was to decide whether Broadcom chips infringed upon the university’s patents or not.

As per various reports, it is indeed the most crucial jury verdict of any kind so far in 2020 and the sixth-largest patent verdict of all time. However, if there is any company that is aware of how to get rid of a billion-dollar patent infringement verdict, it’s undoubtedly Apple. In the last decade, Apple evaded a $533-million verdict corresponding to controlling digital content, a $625.5-million verdict over a way of displaying documents, and a $506-million judgment corresponding to microprocessor technology.

According to a few well-known lawyers in the Intellectual Property (IP) industry, Apple is without any second thoughts one of the most targeted entities in the world, so it makes complete sense for the tech-giant to defend itself aggressively.

On its victory, Caltech said in a statement that while being a non-profit institution of higher education and research, it is committed to safeguarding its IP to expand human knowledge and benefit society.