Can you obtain a Copyright on Fictional Characters? 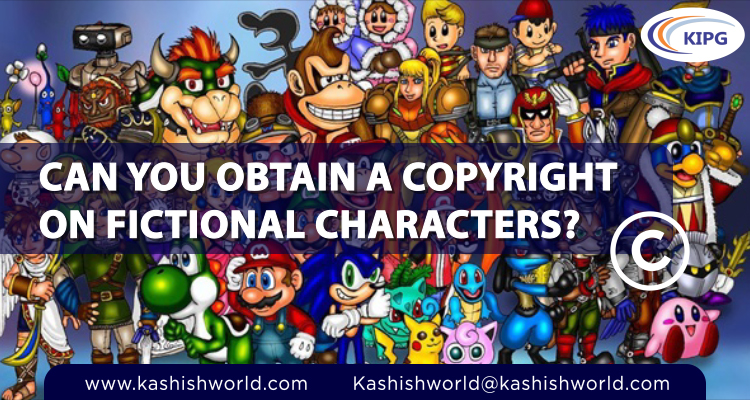 The commercial and widespread appeal of fictional characters quite often outshines the characters’ role within the parent work. Hence, it is necessary to ensure that the creators of these characters are accorded with reasonable and uniform protection from unauthorized exploitations of the characters. Not only are these characters at a high risk of distortion and misuse, but also their creator’s rights and reputation are at stake. Similarly, licensees and advertisers have economic interests in the characters and express the need to protect them from misuse by third parties.

A fictional character has three identifiable and legally significant components: its name, its physical or visual appearance, and its physical attributes and personality traits or characterization. Furthermore, fictional characters can be classified into four types – Pure, Literary, Visual, and Cartoon. Pure characters are the ones that do not appear physically in the incorporated work. Literary characters arise from books or scripts with descriptions and actions. Visual characters are those that are visible in the works, for instance, in movies. Cartoon characters are all line drawings of a perceived simplicity. Among these four classifications, pure characters tend to receive negligible or no protection, whereas cartoon characters have been given more protection by the courts.

When does a Fictional Character Qualify for Copyright Protection?

Copyright protects distinctive expressions; however, it doesn’t protect mere ideas or themes. Courts have defined a character as an aggregation of the particular talents and traits, which his creator selects for him. When these specific abilities and qualities can be considered to be expressive features, unlike mere themes or ideas, the character can be given protection. Otherwise, the character, upon publication, becomes instantly available for public exploitation. With time, the courts have come up with detailed characteristics of copyrightable characters. One such criterion requires the characters to be ‘sufficiently delineated,’ along with ‘consistent, widely identifiable traits.’ The characters that have appeared several times, and are an integral part of the popular culture, have a greater chance of attaining protection. The same happens because the various appearances help to delineate a character’s abilities to a greater extent. It can be seen impliedly in the United States James Bond decision (M.G.M. v. American Honda Motor Co.), where it was held that the plaintiffs acquired copyright to the James Bond character under their copyright ownership of the film series.

Although an iconic status is a noteworthy aspect, it is not a precondition for protection. For instance, a character called ‘Bill’ was given protection, although it appeared only in three advertisements. His character was deliberated to be delineated adequately.

Position under the US Copyright Law and Tests Evolved

At present, the US Copyright Act grants copyright to an author if the work is original, creative, the true subject matter of copyright, and is stable in a physical medium of expression. Fictional characters are fundamentally not copyrightable as the Act states that under no circumstance can copyright protection for an original work of authorship prolong to any idea, and if a fictional character were no more than a stock character, such a character would lack the novel expressive quality required for copyright protection, separate from the work in which it appears.

Nevertheless, courts have embraced a two-stage test to regulate copyright infringement of a fictional character. This test obliges courts to decide whether or not the character’s expression is copyrightable; and, if it is, whether or not there is an infringement of this expression. Based on the previous question, two tests enumerated by United States courts are immensely popular, namely, the ‘Distinct Delineation’ test and the ‘Story Being Told’ test.

In India, paintings, sculptures, drawings, engravings, or photographs have been encompassed in the definition of ‘artistic works.’ However, a character is not protected; what is protected is the precise drawing of a cartoon or episode based on it. Likewise, under the definition of ‘literary works,’ the work, which is written down in words, is copyrightable. However, a character’s characteristics are not copyrightable as they remain in the imagination of the readers, and thus the entire story, which, if read in entirety, gives a hint of the character. Therefore, under the Indian statutory law, characters do not fall under the category enlisted as copyrightable in the Copyright Act. Nevertheless, the courts have still widened the domain of the expression ‘work,’ and have protected characters in various decisions.

In the case of Raja Pocket Books vs. Radha Pocket Books, the comic character Nagraj was imitated by the defendant in his comic, and was named ‘Nagesh.’ The court found that ‘the characters’ personalities were similar and both the green snakes had a serpentine-like look with red belts.” The court held that not only the idea was borrowed, but the expression was copied too. The court gave an interim injunction for the duration of the suit to prohibit the defendant from circulating stickers, posters, or any other material, endorsing the character under the name Nagesh. 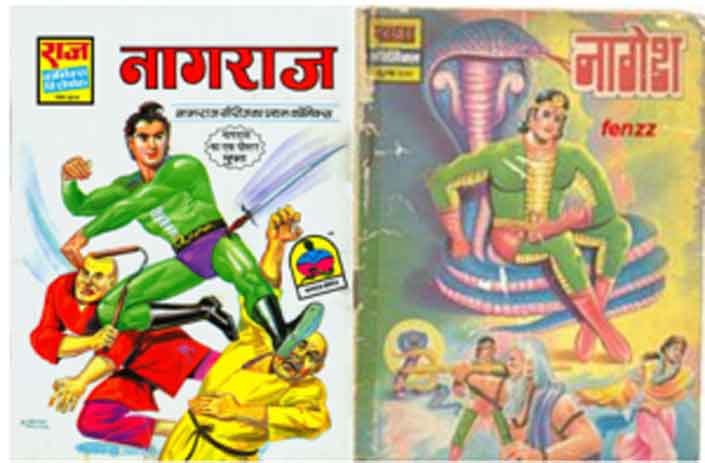 -A comparison of the two characters Nagraj (left) and Nagesh (right)

The question of what makes a character capable of obtaining protection under the copyright regime was discussed in the case of Star India Pvt. Ltd vs. Leo Burnett, where the court opined, “The characters to be merchandised must have gained some public recognition, that is, achieved a form of an independent life and public recognition for itself independently of the original product or independently of the milieu/area in which it appears.”

In the case of Sholay Media and Entertainment Pvt Ltd. vs. Parag Sanghvi and Ors, the Delhi High Court imposed a fine of Rs. 10 lacs as punitive damages on Director Ram Gopal Varma for ‘intentionally and deliberately’ coming out with the remake of the 1975 blockbuster ‘Sholay,’ by violating the exclusive copyright vested with Sholay Media and Entertainment Pvt Ltd and misusing the characters named Gabbar Singh, Jai, Veeru, Radha.

The judicial recognition of copyright, existing in literary characters, was highlighted in the case of Arbaaz Khan vs. North Star Entertainment Pvt. Ltd by the Bombay High Court. The court, while examining whether or not copyright would subsist in the character of “Chulbul Pandey” from the Dabangg movie franchise, opined that “As to the general principle that the character is unique and the portrayal of that character as also the ‘writing up’ of that character in an underlying literary work is capable of protection is acceptable.”

Once it is recognized that a fictional character is copyrightable, the character’s creator or owner must establish a genuine infringement. He needs to show that not only has there been an overall borrowing of ideas but also copying of the way of expression. Deliberate copying is quite challenging to prove straightforwardly, in most cases, and so it is frequently concluded by indirect evidence. The major test used to regulate infringement is by equating the ‘degree of substantial similarity’ amongst the original character and the alleged infringer.

The question that still remains is – “Under which category of ‘work’ should we consider a character to be granted copyright protection?” What can be protected under ‘artistic works’ is the exact drawing of the cartoon and the episodes based on it. The features of the character remain out of this ambit. In the same way, under ‘literary works,’ what can be copyrighted is the whole story, from where the character can only be perceived by understanding it in its entirety. Under the statutory Indian law, characters do not exactly fall under any of the categories of ‘works’ enlisted in the Act to be given Copyright Protection. It is the same position in the law for the United States. Yet, the courts have suo motu taken the step to provide them with protection separately. Therefore, the creators and owners of fictional characters, whether visual, literary or cartoon, can safeguard their rights in the characters by ensuring that: