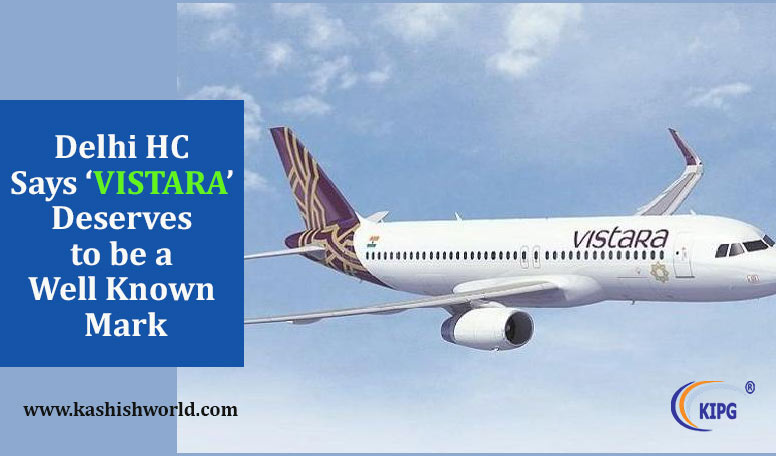 The Delhi High Court (HC) has recently restrained Pilot 18 Aviation Book Store, an aviation studies web portal, from permanently selling and trading products with the ‘VISTARA’ mark. The Court strongly believes that ‘VISTARA’ is worthy of being declared as a Well Known Mark. It has also directed the owner of the web portal to pay a compensation of Rs. 2 lacs to the operator of Vistara Airlines, Tata Sia Airlines Ltd.

The ruling was directed by a Single Judge Bench of Justice, Prathiba M Singh, in the lawsuit filed against the defendant by the plaintiff, Tata Sia Airlines. The plaintiff had taken the case to Court after coming across the fact that the defendant was offering various things like badges, mugs, name tags, etc., with the ‘VISTARA’ mark in an identical device mark or logo form. Moreover, the items were being sold on many E-commerce portals, including Snapdeal and Amazon.

According to the Court, merchandise of products with the name of various airlines not only violated the Trademark Rights of the parties involved but also posed a threat since some unauthorized people could have entered into the airport based on counterfeit merchandise illegally bearing the trademarks of the respective airlines.

The Court also stated that the mark ‘VISTARA’ is quite famous in India as it has acquired a unique status and enjoys an enormous reputation in the travel, airline, and tourism industry. The Court further said that the use of this mark in any other unrelated services would create immense confusion and deception in the minds of people. Because of all this, the Court believed that the defendant was liable to be permanently injuncted from using the ‘VISTARA’ mark and had to pay the monetary damages as well.

Consequently, the owner of the web portal agreed that he had made a false statement in the Court and regretted doing the same. The question of ‘further action’ against the owner will be taken in the next hearing. Nevertheless, the Court has ordered the defendant to pay Rs 2 lacs (monetary damages) to the plaintiff within one month from the date of order.