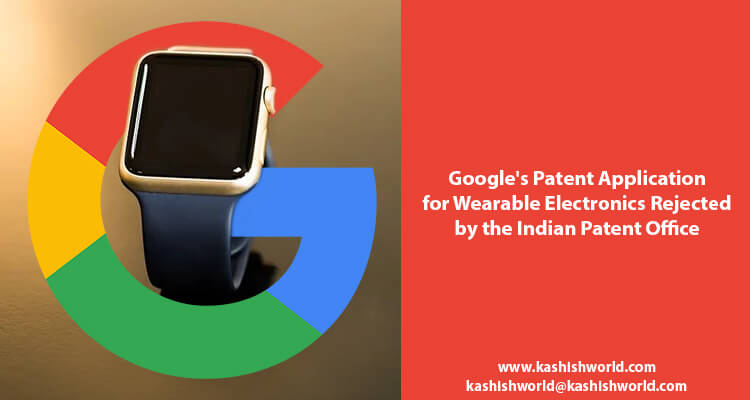 The Indian Patent Office has quite recently rejected Google’s Patent Application for wearable electronic devices by observing that it doesn’t account for the inventive steps and doesn’t include the full description of its use and method in the complete specification. In its patent application, Google stated that the invention consists of electronic devices provided in shoes or ankle bracelets.

Filed for the “System and method for electronic devices in 2007,” the patent application specifies multiple methods, such as electronic communication devices attached to the clothes, a shoe, which can communicate data to the users, ankle bracelets capable of transmitting updated information from the body to the users, and wireless earpieces. The corresponding drawings submitted by Google to the patent office also showed the design of a shoe, which can be a wearable electronic device. The device mounted on the shoe has a display for caller ID information, showtime, pulse rate, and temperature, and according to the patent application, such wearables provide functions that are not present in the already existing devices in today’s digital age, such as the smartphones and personal digital assistants. The wearable device consists of various features like satellite navigation receiver, calender information, vibrator, camera, motion sensing unit, humidity sensor, air pressure sensor, and temperature sensor, amongst many others.

Google has been developing its wearable ecosystem with Wear OS that is widely used in smartwatches for messaging, fitness tracking, and several other things. As per various reports, Google acquired Fitbit (wireless-enabled wearable technology devices maker) for $2.1 in 2019 with further plans of expanding its wearables offerings and investing more on Wear OS.