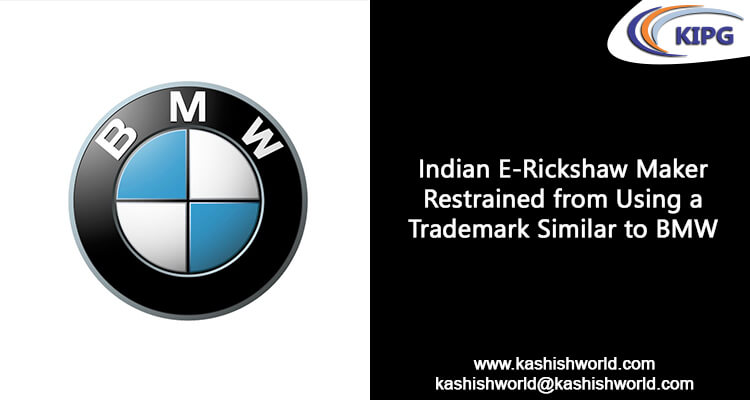 The Delhi High Court has quite recently restrained Om Balajee Automobile Private Limited (an Indian e-rickshaw manufacturer) from getting involved and dealing with any goods bearing the mark “DMW” or any other mark, which is identical or deceptively similar to that of BMW (A German multinational company specializing in producing automobiles and motorcycles).

In his interim order, Justice Jayant Nath stated that prima facie Bayerische Motoren Werke, commonly referred to as BMW, has successfully established and proved the fact that the Indian company has infringed upon its Trademark Rights that too, with a dishonest intention of extracting undue advantage of the reputation and goodwill associated with the German company. Furthermore, the court also dismissed the stand put forward by the Indian company, which said that it has been manufacturing e-rickshaws since 2013 under the “DMW” trademark, and BMW took legal action and approached the high court in 2017, that is, after a delay of four long years. The court replied by saying that the delay on the part of the plaintiff (BMW) in filing the present lawsuit would not be sufficient to deter grant of injunction in favor of the plaintiff.

The Delhi High Court also made a point of the fact that the German auto major BMW has been manufacturing its motorcycles since 1923 under the BMW mark and cars since 1928. It stated that BMW has a global sales network in even more than 140 countries and assemble plants in 14 nations, and the company generated total revenue of 94.163 million in 2016. In such a scenario, the court believes that the use of the mark “DMW” by an Indian company indeed appears to be a dishonest act of extracting advantage of the reputation and goodwill associated with BMW. The court specified that the use of the mark “DMW” is likely to mislead an average human being of ordinary intelligence. It also noted that the mark “DMW” is both phonetically and visually similar to the BMW mark, which is, without any second thoughts, a well-known trademark. Consequently, under the Indian Trademark Law and Trademark Act, the use of the mark by Om Balajee on its products constitutes Trademark Infringement.

The court has passed an ad interim injunction corresponding to restraining the defendant, along with its offices and agents, from manufacturing, importing, exporting, advertising, offering for sale, or dealing with any goods bearing the mark “DMW” or any other mark similar to the plaintiff’s BMW trademark.