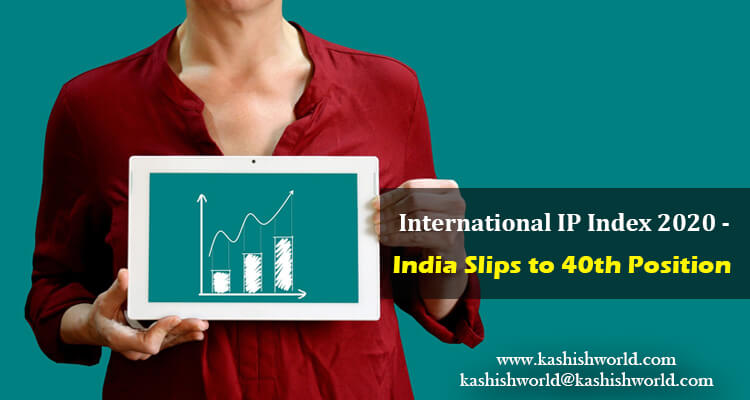 As per a report submitted by the US Chamber of Commerce’s Global Innovation Policy Center (GIPC), India has been ranked 40th on the International Intellectual Property (IP) Index 2020 (eighth edition), which evaluates and analyses IP climate in a total of 53 economies.

Last year, India was ranked 36th out of a total of 50 countries. However, when it comes to Intellectual Property Protection and dealing with copyright issues, the nation has shown quite a lot of improvement in terms of scores (a 2.42% jump in an absolute score) by jumping from 36.04% (16.22 out of 45) in 2019 to 38.46% (19.23 out of 50) in 2020. Also, this year, India’s relative score has increased by 6.71% as well. The Dominican Republic and Greece are two new index economies that were successful in scoring ahead of India. Additionally, Ukraine and the Philippines leapfrogged India and moved onto a leading position.

Talking about India’s achievements in the IP industry, the GIPC said that the Indian government has put in sincere efforts for supporting investments in creativity and innovation by incorporating increasingly robust IP enforcement and protection ever since the release of the 2016 National IPR policy. It also mentioned that India has significantly improved its speed of processing the trademark and Patent Applications, enhanced awareness of Intellectual Property Rights (IPRs) among Indian creators, inventors, and innovators, and facilitated the registration and enforcement of those rights as well.

As per the eighth edition (2020) of the annual report, India’s score on the Chamber’s International IP Index shows the nation’s growing investment in the IP industry driven by creativity and innovation. Moreover, the index particularly highlights various reforms that proved to be exceedingly beneficial in strengthening India’s overall IP ecosystem over the last year.

In 2019, the Delhi High Court efficiently used dynamic injunctions for disabling the access to copyright-infringing content on the Internet, which resulted in an increase in India’s overall score corresponding to two of the copyright-related indicators. Furthermore, the use of these injunctions has placed India alongside global leaders, including the UK and Singapore, in Copyright Enforcement. Consequently, India scores ahead of 24 other nations in the copyright indicators. The Delhi High Court was also successful in issuing a series of judgments corresponding to providing clarity on the already existing statutes concerning Trademark Protection online, which further increased India’s score on one of the trademark-related indicators. By scoring ahead of 28 other economies, India continued performing pretty well in the Systematic Efficiency Indicator as well.

As per the report, all the achievements are a result of the Indian government’s concerted effort with the stakeholders during IP policy formation along with the creation of much greater awareness about the crucial importance of IP protection. The GIPC has efficaciously identified multiple challenges for India, including patentability requirements, Patent Opposition, Patent Enforcement, compulsory licensing, regulatory data protection, to name a few.

Nevertheless, the report said that with strong IP standards, India holds immense potential for solidifying its position as the world’s fastest-growing economy, which shall further bolster its reputation as a destination for doing business and support its own creative and innovative industries.