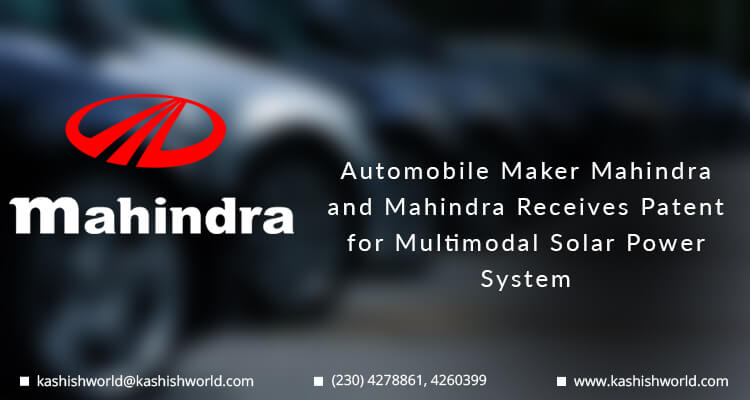 Mahindra and Mahindra Ltd, an India-based multinational car manufacturing corporation, has recently received a new patent for its multimodal solar power system on vehicle rooftops, which shall help in utilizing solar power for various operations in a vehicle. The solar power system will support the operation of an air-conditioner and further reduce the electric load demand on the vehicle’s battery.

As per the documents, the solar panels will be fixed on vehicle rooftops to act as a supplementary power source for electrical load demand while having no impact on the vehicle’s aerodynamics. A sensor will support the control unit in identifying several different modes, including parked mode, running mode, and night mode, and further, take action accordingly. There will be absolutely no restriction on the type of vehicle as the solar power system will work with all types like a hybrid, combustion, or electric vehicle. Besides, with an extraordinary design, it will also operate efficiently at all times of the day.

In the running mode, the solar panel, selected as per the vehicle’s requirements, charges the primary battery for reducing the load on the alternator and the power generator part – responsible for charging the battery and supplying the additional power to the electrical system of the vehicle.

In the parked mode, the solar panel charges the secondary battery of the vehicle for its night mode operation. After the batteries are fully charged, the solar power system powers the Air Conditioner (AC) and other cooling or heating accessories.

The night mode adds to an advanced feature of the solar power system, in which there is a secondary battery in the vehicle to support its electrical demands at night. The way it works is that the solar energy helps the solar power system in charging the secondary battery during the day so that it is ready for use at night, which further helps in ensuring reduced alternator load on the engine at the same time.

The solar power system helps in keeping the battery charged, which subsequently reduces the alternator load on the engine and saves a part of the power required for running the alternator to a great extent. Since at night, the vehicle uses the secondary battery charged during the day, there is a considerable decrease in the greenhouse gas emission even during the night time.

Mahindra and Mahindra, has informed the Patent Office that it hasn’t filed any Patent Application concerning the same invention outside India. The company believes the concept and application that go behind utilizing the solar energy for charging different batteries or using the power for several different modes of the vehicle aren’t obvious.