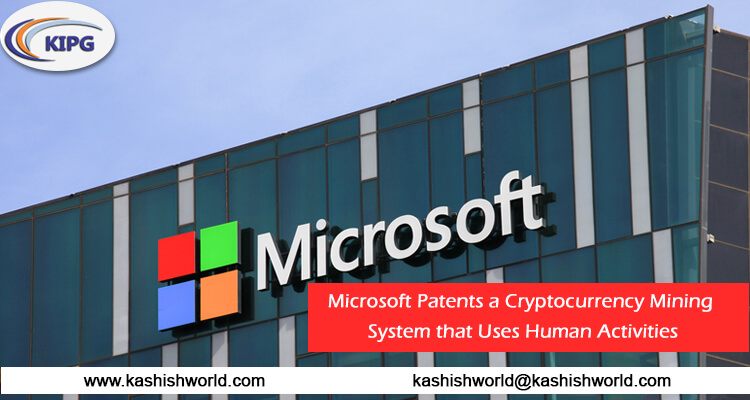 Microsoft Technology Licensing (the licensing arm of Microsoft Corp., owning a vast majority of patents and responsible for licensing them) has been quite recently granted an international patent corresponding to a cryptocurrency mining system that leverages the human body activity data. The patent got published on 26th March 2020 by the World Intellectual Property Organization (WIPO). The Patent Application was filed last year on 20th June.

The patent reads that human activities (including body heat and brain waves, at the time of performing online tasks like using chatbots and search engines and reading ads) associated with a task provided to a user by the information or service provider may be used in the mining process of the cryptocurrency system. The patent also states that through this system, a user would be capable of solving the computationally difficult problems unconsciously.

By noting that the method described may reduce the computational energy for the process of mining and make it faster, the patent gives an example and states that – in place of the massive computational work needed by some conventional cryptocurrency systems, data generated as a consequence of the body activity of the user can indeed be a proof-of-work and help the user in solving the computationally difficult problems unconsciously.

The patent efficiently describes a system where a device can verify whether the human activity data satisfies one or more conditions required by the cryptocurrency system, and further, awards cryptocurrency to the user whose body activity data gets verified. The patent explains that multiple types of sensors can be used for measuring or sensing body activity or scanning the human body. The sensors can be electroencephalography (EEG) sensors, functional magnetic resonance imaging (fMRI) scanners or sensors, near-infrared spectroscopy (NIRS) sensors, thermal sensors, heart rate monitors, ultrasonic sensors, radio frequency (RF) sensors, optical sensors, cameras, or any other sensor or scanner.

The patent also details that the system may reward cryptocurrency to the task operator or owner for providing services like search engines, applications or websites, and chatbots, offering free access to the users for paid content like audio and video streaming or electric books or sharing data or information with the users.