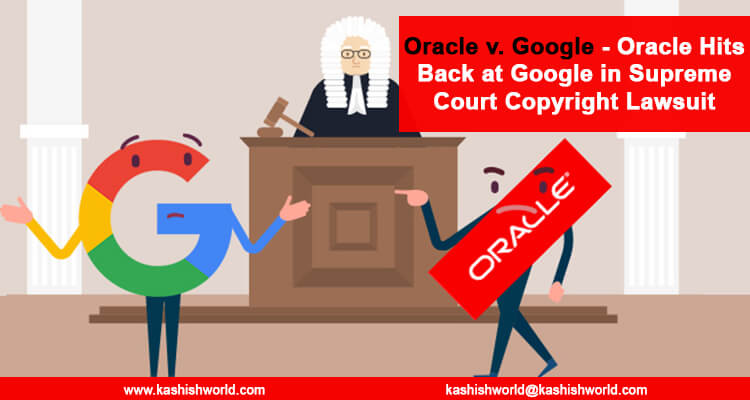 The Oracle versus Google nearly decade-old Copyright Lawsuit is now before the Supreme Court. Quite recently, Oracle has filed its response in the Supreme Court by accusing Google of violating its Intellectual Property Rights (IPRs) and using Java APIs in Google’s Android operating system. Oracle argued by saying that Google committed an egregious act of plagiarism by building support for Java in its Android operating system, that too, without licensing the language officially. The two arch-rivals will now argue their Copyright Case on 24th March 2020 before the Supreme Court.

Oracle versus Google is without any doubt the latest iteration of an almost decade-long copyright fight, and it revolves around two prime questions, namely, can a person copyright the building blocks of a programming language like Java, and if he can, then is borrowing the code for interoperability considered as fair use? Oracle has a straight forward answer on both counts, and that is a “No.” The American multinational computer technology corporation states that Java is indeed its creative and complex creation, which Google copied after failing miserably in developing its app ecosystem. Oracle even claimed that Google’s resulting Android operating system undercut Java in a manner that hurts its original value.

In its filing at the Supreme Court, Oracle has claimed that if the court declares that a competitor or rival may copy some creative work precisely only because it is appealing, then no technology company shall ever make an enormous investment corresponding to launching a groundbreaking work like Java SE. Furthermore, Oracle somewhat made a sweeping claim by saying that if Google emerges as a winner in this case, then it would damage the United States’ ability to enforce Copyright Protections across the globe as the nation won’t be able to insist on strong worldwide copyright protections while abandoning them at home.

Many widely-known and well-established technology companies and organizations are showing immense support to Google in this case as they strongly believe that Oracle’s win would make it exceedingly arduous for all of them to build interoperable software. Oracle, on the other hand, feels that this notion is entirely irrelevant and argued by saying that although Google has made it quite convenient for Java developers to come up with Android apps; however, Java and Android apps are not much compatible.

Till now, Google has won two decisions in lower courts, and Oracle has successfully gotten them overturned at an appellate level twice. Therefore, if the Supreme Court rules in favor of Oracle by letting the court’s latest decision stand, then Oracle will be victorious, leading to Google facing undetermined damages.