Photographer Loses Copyright Lawsuit over Use of Embedded Instagram Photo 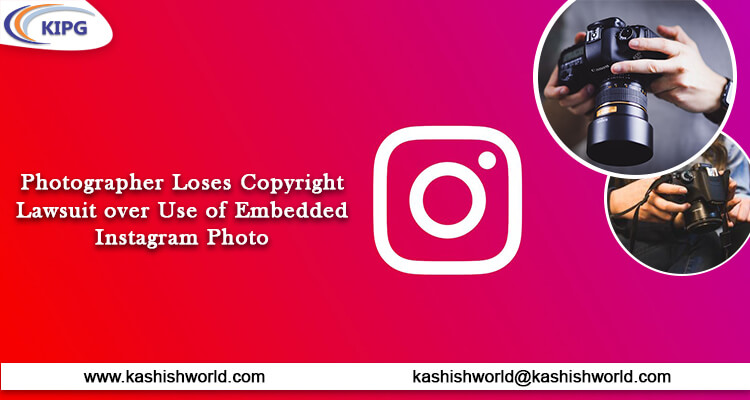 When we consider the aspect of appropriating the pictures found online on the digital channels, the situation is undoubtedly confusing. We all need to pay attention to one thing – Do we have the right to reuse a picture shared publicly? Most of us would think that it is a case of Copyright Infringement. However, a New York judge has quite recently set a precedent that shall now have a long-lasting impact on copyright and related rules and regulations. The judge has ruled that posting pictures on Instagram gives anyone the right to reuse them as well.

The Copyright Case revolved around Stephanie Sinclair, a professional photographer widely-known for exploring human rights and gender issues across the globe, and Mashable, a digital media & entertainment website founded in 2005 by Pete Cashmore. Sinclair had uploaded one of her photographs – a picture of a mother and child in Guatemala – on her public Instagram account. When Mashable contacted Sinclair to license the photo for US$50 and let it reuse the same for a story, she declined. However, Mashable still went ahead with using the image and embedding her Instagram post in its article on female photographers. At a later stage, Sinclair demanded Mashable to remove the embedded picture from the website and even demanded compensation, for which Mashable refused. Consequently, Sinclair ended up filing a Copyright Infringement Lawsuit against Mashable.

In the lawsuit filed, Sinclair argued by saying that Mashable infringed upon her copyright in the photograph since it had no permission for using the same. Mashable, on the other hand, stated that it had a valid sublicense from Instagram, corresponding to using the photograph, as a result of which, it didn’t infringe upon Sinclair’s copyright. In this scenario, the court sided with Mashable.

By creating an account on Instagram, Sinclair was bound to the platform’s Terms of Use, which give Instagram the exclusive right to sublicense the content posted and made public by the user. Instagram then exercised the exclusive right by giving Mashable a sublicense for using the photo via sharing the embedded photo. What Instagram does is it uses API (Application Programming Interface), which enables the users to share the public content posted by other users on the platform. The policies on Instagram enable users to use API for embedding posts on their websites.

The court, in this matter, found that Sinclair’s right to license the photograph directly and Instagram’s right to sublicense the same to Mashable are two different aspects and entirely independent from one another.

Sinclair also mentioned that Instagram’s authorization to sublicense the photograph was invalid due to the complicated and interconnected documents establishing the rights. Although the court agreed with the point that Instagram could make its terms of service a bit more concise and accessible; however, the court also said that the platform was never under an obligation to do so. At last, Sinclair argued by saying that it was unfair on Instagram’s part to force a professional photographer into choosing between keeping her unique work private on a popular photo-sharing platform or posting it publicly, which would, in turn, allow the platform to sublicense the same to users such as Mashable. Without any second thoughts, the court observed that this dilemma was indeed real; however, the court said that Sinclair had already made her choice by opting for posting the photograph publicly.

This case has successfully affirmed that the use of a public photograph on Instagram as an embedded photograph in an article of a third-party is covered under Instagram’s terms of use. However, this ruling doesn’t necessarily imply that Instagram’s terms of use grant a blank check corresponding to the use of publicly posted content. Without any doubt, the ruling has addressed only a single use of an embedded photograph by not touching the other potential concerns in the same matter, such as unfair competition, right of publicity, Trademark Infringement, or false sponsorship or affiliation.