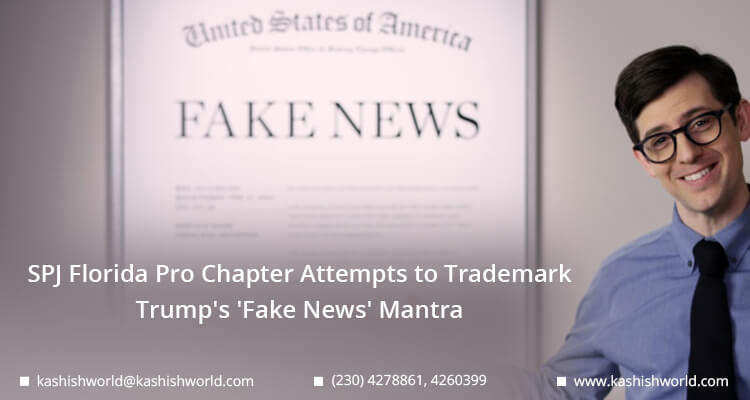 The Florida Pro Chapter of the Society of Professional Journalists (SPJ) has filed a Trademark Application for the term ‘fake news’ with the US Patent and Trademark Office (USPTO). The journalists want to take the trademark ownership of ‘fake news’ as President Donald Trump frequently uses the term to criticize the information he doesn’t like and discredit the stories.

Emily Bloch, Florida Times-Union reporter, published an essay on 21st October 2019 in Teen Vogue (a former US print magazine and current online publication) announcing that members of her local SPJ have a pending trademark application with the USPTO. She also stated that President Trump’s hefty use of the term ‘fake news’ threatens the livelihood of healthy discourse within a democracy.

Although the journalists group has realized that their trademark application shall probably not get approved on two words that have been a part of the media lexicon for quite a while now, the application process indeed gives them a reason to send cease and desist letters to anyone who takes liberties with the definition of the term ‘fake news.’ Moreover, they have already sent a cease and desist order to the commander-in-chief, whom they believe uses the term on an average of more than once per day.

The cease and desist letter to Trump reads in part, “Referring to factual stories that are critical of your administration as FAKE NEWS (TM pending) is indeed Trademark Infringement.” The letter also mentioned that Trump’s misuse of the term ‘fake news’ has created confusion in the minds of American people and has shaken their trust in journalism, which is undoubtedly vital to their democracy. Besides, the letter allegedly stated that if Trump fails to comply with their request, they may pursue legal action. At last, The Florida Pro Chapter of the Society of Professional Journalists explained to the president that the letter, which he or his staff was receiving shouldn’t be taken too seriously, as it was just a satire that is way too different than what he refers to as ‘fake news.’

According to Emily Bloch, she has been harassed, ridiculed, and threatened ever since she became a journalist in the year 2016. She blames President Trump’s incendiary rhetoric for fueling antipathy toward reporters and journalists.

The Florida Pro Chapter of the Society of Professional Journalists hopes that their trademark application causes the American people to consider the downside of living in a society that isn’t capable of differentiating between propaganda and information. They even created a video to introduce their applied-for trademark and launched a website called ‘Fake News TM’ that will help the public in knowing which stories are real and which ones are not.