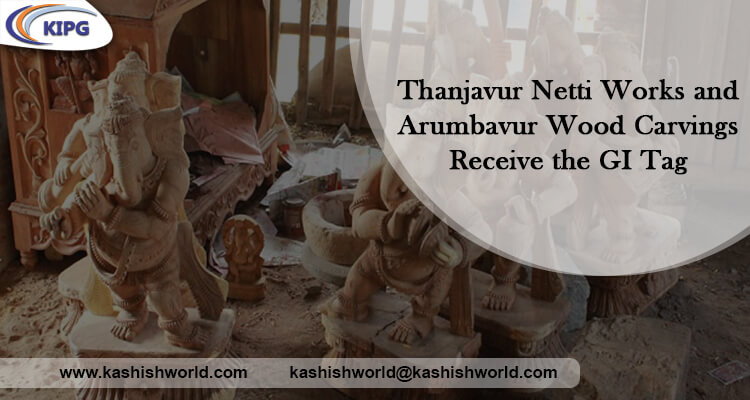 The Deputy Registrar of Geographical Indications, Chinnaraja G.Naidu, has stated that both the GI applications have got registered and have received the GI tag.

The Thanjavur Netti Works are made from the pith, which is, in turn, obtained from Netti, a hydrophyte plant, known as Aeschynomene aspera. The lakes around Pudukottai are adjacent to the marshy lands, which are favorable for the growth of the hydrophytic plant. The soil found in Thanjavur is suitable for the growth of the plant that produces the pith handicraft based in Thanjavur. Some of the notable works from the Thanjavur Netti Works include Hindu idols, models of the Brihadeeshwara Temple, door hangings, garlands, and showpieces for decoration purposes. The pith stems are primarily found in and around Mannargudi and the Thanjavur region.

The Arumbavur Wood Carving is carried out at Arumbavur and in and around the Veppanthattai taluk of Perambalur district. Primarily, the wood carvings are made out of the wooden logs of Indian Siris Tree, Mango Tree, Indian Ash Tree, Lingam Tree, Neem Tree, and Rosewood. The architectural details on temple sculptures and carvings often inspire the Arambavur Wood Carvings. Usually, the dimensions of the wooden blocks used are as per the wooden sculpture to be carved. In general, the statues are crafted somewhere between the range of 1-12 feet.

In the Arumbavur Wood Carvings, sculptures of Goddess Saraswati, Lord Siva, Lord Vinayaka, and Lord Krishna can be seen, along with motifs such as mythical swans, kaamadhenu, poomakhumbhal cornucopia, amongst several other floral motifs. Temple cars and chariots used during processions of deities, avatars of Goddess Laksmi, Dasavatara panels, figures of Christ, and vahanas for temple deities are among the other numerous designs found.