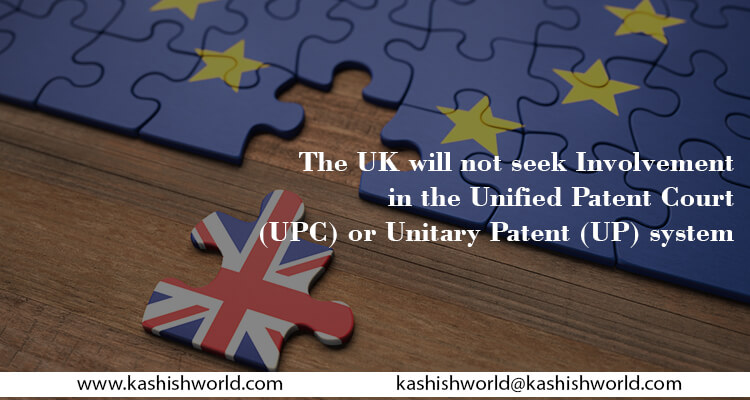 The UK government has quite recently made it very clear by confirming that, post-Brexit, the nation will not be a part of the Unified Patent Court (UPC) or Unitary Patent (UP) system, despite previously having committed to do so.

Understanding the Unitary Patent (UP) system

At present, after the grant of a European Patent, it becomes what we specifically refer to as a bundle of national patents. Obtaining these national patents comes with varying translation requirements for validating the European patent in every European state of interest, and further maintaining these different patents requires the need to pay a separate renewal fee in each country as well. As patent infringement lawsuits and revocation proceedings are also conducted at the national level itself, sometimes multiple lawsuits are corresponding to the same European patent in different countries, which leads to different results.

The proposed new Unitary Patent (UP) system replaces the current patent system with a single patent, thereby removing the requirement for going ahead with separate post-grant validation. It promises some crucial savings in the renewal fee and translation costs as well, specifically for the patent owners who look forward to validating in more than a few nations. The UP system is governed by a uniform patent court litigation system, the UPC, which is responsible for issuing a single court ruling that shall, in turn, be applicable in all of the EU countries. To be specific, the basic idea of the UPC is to harmonize the EU Patent Law and save the time of the patent holders by avoiding the need to litigate the same European patent across multiple EU territories.

The UK government had initially confirmed the UP and UPC developments in April 2018 and even consistently ratified since then that it would remain in the UPC after the Brexit. However, now the UK government has confirmed that it will no longer participate in the UP or UPC systems. A government spokesperson stated that being a part of a court that applies EU law and is bound by the CJEU is inconsistent with the objectives of the UK corresponding to becoming an independent self-governing nation.

The decision of the UK government implies that the nation will no longer have the opportunity to host the UPC’s pharmaceutical and life sciences division in London. As the UK was a prime participant in the UPC and was also one of the three states, including France and Germany, required to ratify the court agreement for it to come into force, many commentators are now questioning the ongoing viability of the system.

What remains now to be seen is the ultimate fate of the UPC.