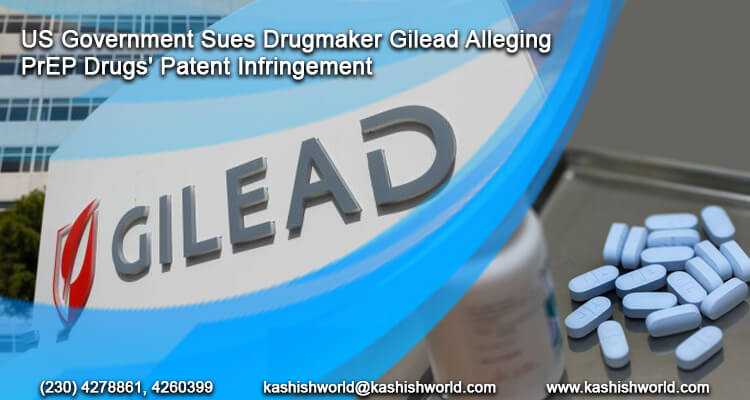 The Federal Government in the US issuing the drugmaker and pharmaceutical giant, Gilead Sciences Inc., for alleged Patent Infringement. The lawsuit filed claims that the company infringed government-owned patents on ‘PrEP’ drugs – used to prevent HIV infection. Approved for use in 2012 in the United States, PrEP is exceedingly effective at preventing HIV infection and is also quite expensive. Gilead Sciences Inc. is a San Francisco-based company and has worked for quite a while with the Centers for Disease Control and Prevention to cure HIV infection. Besides, the company has also provided free drugs for government experiments and made sincere efforts to expand the treatment of hepatitis C. However, now the Department of Health and Human Services (HHS) is claiming that Gilead refused to license its patents and has deliberately, intentionally, and willfully infringed on the department’s patents.

The government is now looking forward to seeking ongoing royalties and retrospective damages from the company. The complaint filed has also asserted that the company has made an enormous amount of money in billions from the sales of the drug. The pills can cost somewhere around $1,700 a bottle and made the company earn $2.6 billion from the sales in the country in 2018.

The Centers for Disease Control and Prevention (CDC) was the first to show that the combination of drugs – emtricitabine and tenofovir disoproxil fumarate – that make-up PrEP, are effective as HIV prevention. Truvada (emtricitabine/tenofovir disoproxil fumarate; FTC/TDF) and Descovy (FTC/tenofovir alafenamide; FTC/TAF), are the only two approved HIV prevention drugs, and both are manufactured by Gilead. According to various reports, Gilead has reaped billions from the sales of these two medications and has also profited from research funded by taxpayers.

In a recent statement delivered, the drugmaker questioned the validity of patents granted to HHS for HIV PrEP since 2015 and declined any notion of willful or intentional infringement. Gilead also stated that HHS had improperly filed the Patent Applications without even alerting or informing it about the same.

Alex M. Azar II, HHS Secretary, said that HHS recognizes and appreciates Gilead’s exceptional role in selling Descovy and Truvada to the patients for the prevention of HIV infection. However, he also stated that Gilead must respect the US Patent System, the efforts put in by the CDC researchers, and the substantial taxpayer contributions to the development of these drugs. The PrEP4All Collaboration, which includes a group of activists working to make HIV PrEP accessible to all the patients, called this lawsuit a necessary first step to ensure access to effective HIV prevention for everyone who needs it. Ever since the Trump Administration has announced its plans to reduce new instances of HIV in the next decade by 90% – the conflict over the HIV prevention drug patents has become more prominent. According to the CDC, there are somewhere around 40,000 new cases of HIV each year.