WHO Insists Upon Fair Access to Vaccines through Patent Limits 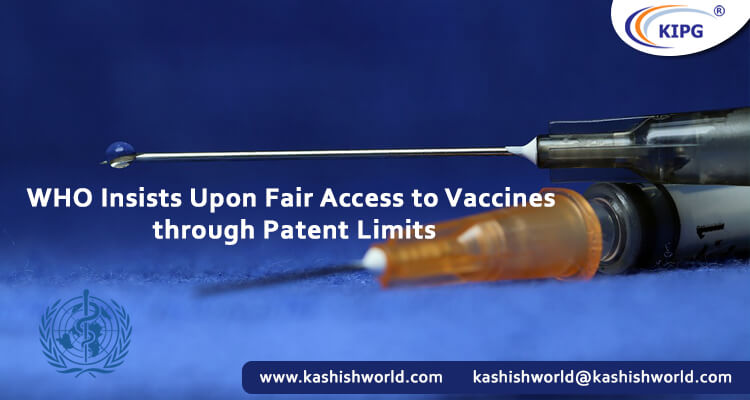 As the global race for coming up with a COVID-19 vaccine is getting intensified day by day, the World Health Organization (WHO) is looking forward to limiting the Patent Rights of the drugmakers for giving equal access to all the nations across the globe. However, this idea doesn’t go well with the drugmakers in the United States, who are nowadays betting way too big on a potential cash cow.

The WHO has recently adopted a resolution, which promises international cooperation to make vaccines accessible at affordable costs by limiting the patent rights involved. Japan and the European Union are among the member nations that proposed the nonbinding resolution, and the US isn’t one of them.

Under a World Trade Organization (WTO) agreement, the WHO is considering a compulsory licensing mechanism, in which a nation facing a pandemic or any other situation of crisis can use the patented technologies of a third-party without seeking the patent owner’s consent. In this scenario, the license fee may be kept down to a small single-digit percentage of the sales, in contrast to the usual 50% or so.

South Korea, Indonesia, India, and Australia, which are among the resolution’s other proponents, worry that the drugmaker that first develops the Coronavirus (COVID-19) vaccine, be it a company in China, the US, or elsewhere – would monopolize the global market through its patent rights. These countries believe that such a company would set the price of the vaccine way too high, thereby making its access impossible for the poorer nations, where the deadly virus is spreading at an alarming rate.

By coming up with this resolution, the WHO is willing to send a unified message to all the countries around the world.

Initially, the mechanism of compulsory licensing was developed as a system for enhancing public hygiene and related conditions in developing nations; however, now even the developed nations like Germany and Canada are modifying their legal systems to make such licensing more convenient.

It is a matter of fact that yes – compulsory licensing needs to be applied by keeping all the crucial aspects in mind. The pharmaceutical companies would become less inclined to develop the vaccines if they can’t recover the money spent at the research and development stages.

Even if all the patent-related issues are resolved, the next question revolves around how it will be possible to distribute the vaccine worldwide at a quick pace. Without any second thoughts, the output will be limited at first, so the entire distribution process will have to be in phases.

Atsuo Hamada, a professor at the Tokyo Medical University, believes that more priority should be given to the health care workers and the ones involved in maintaining security and social functions. Hamada further stated that people with underlying conditions and the ones who are more vulnerable to diseases need to be prioritized as well. According to him, securing vaccines depend on a nation’s negotiating power, and international cooperation shall play an integral role in bringing vaccines to the poorer and developing nations.