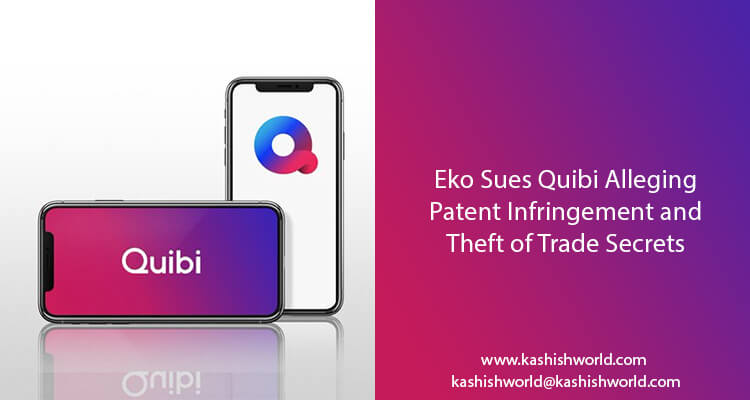 Eko, a New York-based interactive video company, has recently struck back against Jeffrey Katzenberg’s Quibi, an upcoming American short-form mobile video platform, with its lawsuit by accusing Quibi of infringing one of its patents and misappropriating its trade secrets. The Patent Infringement lawsuit filed by Eko comes a day after Quibi had proactively asked a federal court for a ruling that its mobile-video technology does not infringe a patent held by Eko.

Bankrolled with $1.75 billion in funding, Quibi is led by CEO Meg Whitman and chairman Katzenberg. The company announced last week itself that it is all set to launch its service on 6th April 2020 with somewhere around 50 original movies and shows.

The lawsuit revolves around Quibi’s Turnstyle feature that is capable of determining the orientation of a user’s phone (either vertical or horizontal) and presenting content in the appropriate mode. In its complaint filed, Quibi claimed that it began developing Turnstyle in September 2018 and received a patent last month itself covering multiple aspects of the technology.

Eko, on the other hand, has claimed that Quibi blatantly copied Eko’s features using one of its prime patents, US Patent No. 10,460,765 – covering a system for interactive video playback. The company has also alleged that Quibi’s employees, who formerly worked at Snap, stole trade secrets as well, including source code. In a recent statement, Eko referred to Quibi’s complaint as nothing more than a PR stunt. Eko is now looking forward to seeking unspecified monetary damages along with an injunction to stop Quibi from using, selling, offering for sale, or marketing the Turnstyle feature. Additionally, the company also wants the court to force Quibi to assign its latest patent, US Patent No. 10,554,926 – covering a method of presenting media content – to Eko.

According to Eko’s lawsuit, its co-founder and CEO, Yoni Bloch, had met Katzenberg in LA in March 2017 for exploring a potential majority in Eko by Katzenberg’s investment and holding company, WnderCo. At that time, Bloch had displayed Eko’s technology to Katzenberg, which included details of the technology that Quibi now uses in its Turnstyle feature.

In its lawsuit filed, Eko has also accused two of Quibi’s employees – Joseph Burfitt and Clifton Smith, who formerly worked for Snap – as passing along Eko’s proprietary technology and confidential information to Quibi in violation of nondisclosure agreements and further forming the basis of Quibi’s ‘926 patent.

After Quibi’s presentation at CES (an annual trade show presenting new products and technologies in the consumer electronics industry) this year in January during which it unveiled Turnstyle, Eko had sent a cease and desist letter to Quibi by demanding it to stop the unauthorized use of its proprietary technology. Shortly after this incident, Quibi was granted the ‘926 Patent on 4th February 2020.

As per Quibi’s complaint filed, the claims in the patent owned by Eko are inapplicable to its app and the Turnstyle functionality. However, Eko, on the other hand, has accused Quibi of not only copying its technology but also applying for a patent on the same technology.