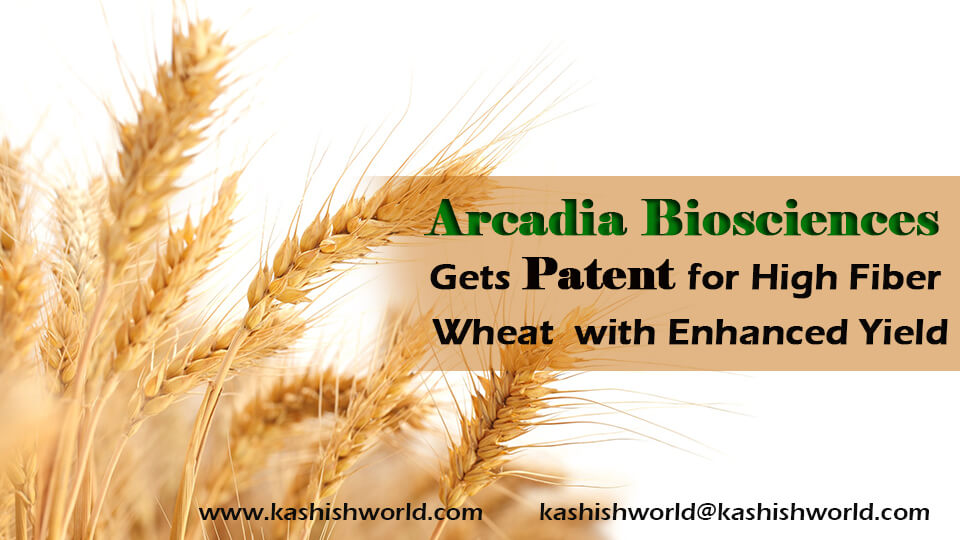 The United States Patent and Trademark Office (USPTO) has recently granted a new Patent to Arcadia Biosciences, Inc. (a publicly-traded American biotechnology company headquartered in Davis, California) corresponding to a yield-improving allele for resistant starch, and high fiber wheat. The innovation, which is the latest one in Arcadia’s GoodWheat™ portfolio of non-genetically modified (non-GM) wheat varieties, was developed through the company’s proprietary technology platform, known as ArcaTech.

The president and CEO of Arcadia Biosciences, Matthew Plavan, said that the invention of the higher-yielding high fiber wheat allele efficiently demonstrates the company’s utmost dedication and commitment in enhancing the strength of its improved wheat platform. He further stated that the company would continue bringing nutritional and valuable innovation to wheat and undoubtedly the customers, via its partnership with Arista Cereal Technologies and Bay State Milling. The partnership brings the company’s high fiber resistant starch bread wheat under Bay State’s HealthSense™ brand portfolio to the market in North America. As per various field reports and surveys conducted by Arcadia, wheat breeding lines carrying the higher-yielding allele produce somewhere around 6-9% higher yields, along with some resulting in pretty higher yields, as much as 30%. Additionally, several field trials have indicated that there may be other advantages to this innovation, such as a reduction in sensitivity to the detrimental effects of cold at some particular growth stages. For instance, wheat carrying the allele produced a 25% higher yield as compared to the wheat without the allele in the scenario where the plots were damaged by frost at an exceedingly sensitive heading stage.

The higher-yielding allele is the result of Arcadia’s ArcaTech technology platform and is known to be the latest among a suite of patents, which Arcadia has licensed to Bay State Milling and Arista Cereal Technologies in North America. All these significant improvements to the crop yield and production efficiency showcase the company’s continuing plans in expanding the adoption and market footprint of high fiber, resistant starch wheat.

Arcadia Biosciences is widely known as a leader in science-based approaches, corresponding to improving the nutritional value and quality of crops and food ingredients. The company’s GoodWheat™ branded ingredients efficiently deliver several health benefits to the customers and further enable consumer packaged goods companies to differentiate their unique brands in the marketplace. Arcadia’s agricultural traits enable farmers across the globe to be more productive by minimizing the impact of agriculture on the surroundings and environment. By applying its proprietary crop innovation technology known as ArcaTech to an emerging crop, the company’s new GoodHemp seed catalog delivers genetically superior clones, hemp seeds, flowers and extracts, and transplants.