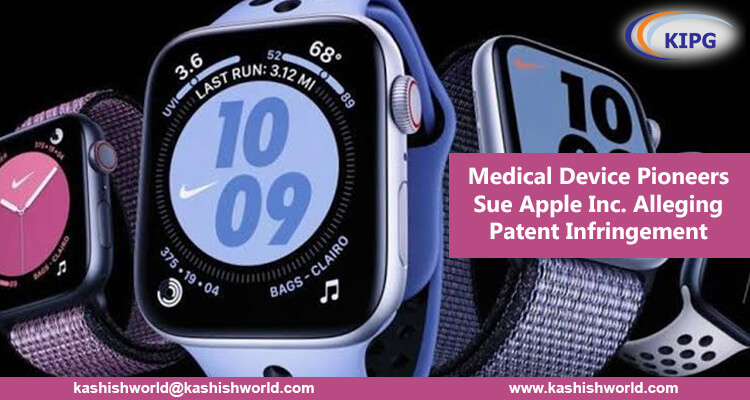 Masimo Corporations, an American manufacturer of noninvasive patient monitoring technologies, and its spinoff, Cercacor Laboratories Inc., have recently accused Apple Inc. of stealing trade secrets and improperly using their inventions corresponding to health monitoring in its Apple Watch Series 4 and 5.

In the Patent Infringement lawsuit filed, the companies have claimed that Apple has infringed on ten of their patents by getting secret information under the guise of a working relationship and then hiring away its prime employees, including Michael O’Reilly, who later became the vice president of health technology efforts at Apple.

The business segment, including Apple TV, Apple Watch, and Beats headphones, is the technology giant’s fastest-growing category and has even generated more than $24 billion in its fiscal year’s sales that ended in September 2019. Masimo and Cercacor have stated that their technology for non-invasive monitoring implementing light helped Apple significantly in overcoming the performance issues of its Watch. The ten patents that Apple has been accused of infringing include the ones used to measure oxygen levels in the blood, and heart rate with the help of detectors and emitters.

Both the companies are now looking forward to obtaining the orders that would further block the use of their patented inventions in the Apple Watch Series 4 and 5, along with the return of all the private and confidential information and unspecified damages.

As per the complaint filed in federal court in Santa Ana, California, Apple contacted Masimo in 2013 and had asked to arrange a meeting for a potential collaboration. Masimo mentioned that Apple was interested in understanding more about its technology for potentially integrating that technology into its own products. After what were productive meetings in the eyes of Masimo, Apple instead hired Masimo’s chief medical officer, Michael O’Reilly, and was privy to sensitive information according to the lawsuit filed. In 2014, Apple hired former Masimo’s scientist and Cercacor’s chief technology officer, Marcelo Lamego, who had restricted access to private and confidential information. Moreover, according to the lawsuit, shortly after beginning work at Apple, Lamego had started pursuing Patent Applications for things he had learned at both these companies. The companies have also stated in their complaint that Apple was well aware of the fact that it was getting private and confidential information from the two men and continued infringing their Patent Rights even after several repeated warnings.

Masimo and Cercacor are also looking forward to adding their engineers to the seven patents issued to Lamego for making themselves at least the joint owners of the patents that are currently assigned to Apple.

It is a matter of fact that yes – Apple is not facing such strong allegations of patent infringement for the very first time from companies that thought they were working with the technology giant. Last year in October, an email developer had accused Apple of stealing its patented technology and then removing his messaging service from the App Store so that it wouldn’t be a competitor anymore.