US Supreme Court Rules that ‘Booking.com’ can Trademark its Name 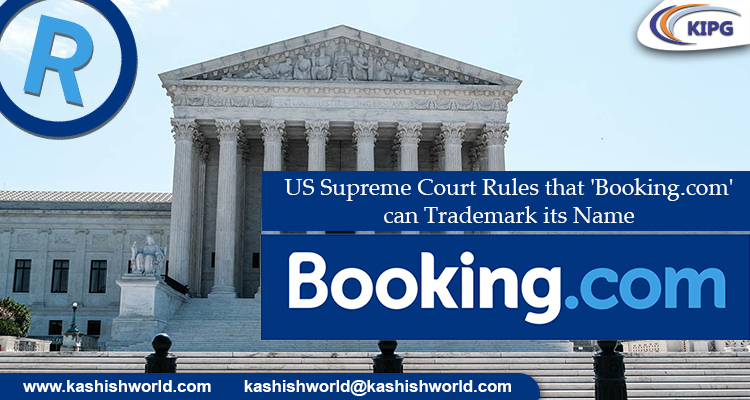 The US Supreme Court has quite recently ruled that “Booking.com,” a travel reservation company and unit of Booking Holdings Inc., deserves to be able to trademark its name. The court sided with Booking.com by overruling a federal agency that found the reservation company’s name way too generic to merit Trademark Protection.

The court’s 8-1 ruling held that the US Patent and Trademark Office (USPTO) wasn’t correct when it rejected the reservation company’s Trademark Application for the name Booking.com. According to the US Supreme Court, the name is distinctive enough in all aspects, and the agency should have approved it without any second thoughts. It also mentioned that adding “.com” to a generic word holds immense potential for making the entire combination eligible to obtain trademark protection.

The court’s ruling also mentioned that as per the surveys, the customers do understand that Booking.com is the name of a particular company and doesn’t refer to online hotel reservation services in general.

In a disagreement, liberal Justice Stephen Breyer stated that the US Supreme Court’s majority gave too much importance to consumer surveys, which, according to him, were of limited value. On the other hand, Amsterdam-based Booking.com welcomed the court’s ruling. Spokesperson Kimberly Soward mentioned in a recent statement delivered that the ruling highlights the US legal system’s capacity to evolve well in the present digital era.

Booking.com’s legal representative, David Bernstein, referred to the ruling as a victory for all the countless brand owners out there, such as Law.com, Weather.com, Hotels.com, and Wine.com that have invested significant resources in building their brands.

The USPTO’s spokesperson, Paul Fucito, declined to comment on the court’s ruling.

The trademark law in the US allows Trademark Registrations only on the terms that are descriptive or can distinguish a specific service or product from the others in the market. The generic words, which refer to an entire category of goods or services like “car” or “computer” can’t obtain protection under the law as the same would give an unfair competitive advantage to the trademark owner.

In was in 2006, when Booking.com began using its name globally. It filed the US trademark applications in 2011 and 2012. A USPTO tribunal rejected the trademark applications in 2016 by saying that “booking” is a generic term for a category of services, and the addition of the term “.com” didn’t transform the same into a protected trademark. However, the lower courts sided with Booking.com in this case, prompting the USPTO’s Supreme Court appeal.