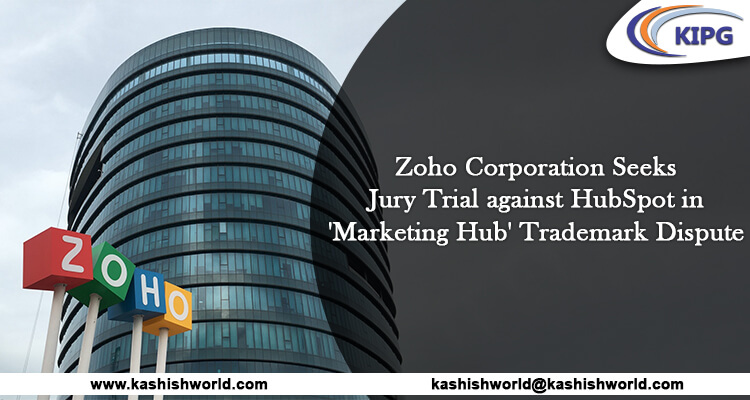 This year in February, HubSpot, Inc., (a US-based developer and marketer specializing in inbound marketing, sales, and customer service) had issued a ‘cease and desist’ order against Zoho Corporation (an Indian-American software-as-a-service (SaaS) unicorn) corresponding to using the term ‘Marketing Hub’ for one of its suite tools. Now, Zoho is looking forward to seeking a jury trial for the Trademark Dispute by deciding not to settle out of court at any cost.

Both HubSpot Inc. and Zoho Corp. offer services corresponding to marketing and sales under the ‘Marketing Hub’ banner. In July 2018, HubSpot had launched its Marketing Hub product, while Zoho came up with Zoho Marketing Hub last year in April. HubSpot had initially sent a notice to Zoho Corp. this year in January by stating that its product name could end up creating confusion in the minds of the customers, which would further erode the goodwill and distinctiveness associated with HubSpot’s trademarks. HubSpot also claimed that under the federal Lanham Act and several state laws, Zoho’s use of the term ‘Marketing Hub’ constitutes unfair competition, Trademark Infringement, and dilution of its Trademark Rights.

Zoho, on the other hand, had rejected all the claims put forward by HubSpot by highlighting that HubSpot’s Trademark Application corresponding to the term ‘Marketing Hub’ was well rejected by the US Patent and Trademark Office (USPTO). In its response, Zoho also mentioned that its mark begins with the fanciful and coined term ‘Zoho,’ which undoubtedly dominates over the descriptive term ‘Marketing Hub.’

In a statement issued last month as well, Zoho Corp. kept saying that it neither has infringed upon HubSpot’s trademark rights nor has it engaged in any unfair competition under the US federal law. Meanwhile, HubSpot didn’t make any comment on the ongoing trademark dispute. Various sources believe that even though HubSpot has the right, it still doesn’t have any certificate to prove the same. Now, by looking forward to seeking a jury trial, Zoho is hopeful the court will realize that HubSpot has no right to prevent it from using the term ‘Marketing Hub.’

For Indian startups too, brand names have now become a bone of contention. There have been several similar cases popping up in India as well, with the recent one revolving around digital payment apps PhonePe and BharatPe’s quarrel over the use of the suffix ‘Pe.’ Launched in 2016, PhonePe had first highlighted the issue in August 2018, that is, a few months after BharatPe’s launch. PhonePe had also sent a legal notice to BharatPe for asking the company to remove the suffix. In response, BharatPe changed its logo and color scheme, which, however, didn’t go well with PhonePe, and consequently, the company decided to take legal action. Last year in May, PhonePe filed a Trademark Infringement Lawsuit against BharatPe. Then in the same year in September, PhonePe dragged BharatPe to the Delhi High Court by claiming that it has the trademark right over the suffix ‘Pe’ and sought an injunction order against BharatPe corresponding to using the same term.